The new jailbreak tweak AccountChanger helps you keep track of your multiple AppStore accounts by adding an "Accounts" button to the Update section of the AppStore. The latest version is beta so some bugs are being worked out. However, if you use more than one account this tweak could be helpful, and may be worth a look. 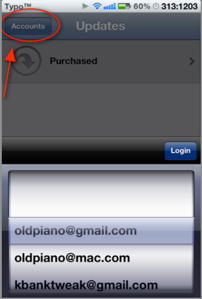 You can give the tweak a whirl by downloading it for free from the BigBoss repo in Cydia. AccountChanger requires iOS 5 or higher.

There is an iPad version but the accounts selector will display abnormally. You can report bugs for the iPhone and iPad versions to @typ02di0 via Twitter.

Such a great tweak is this; I have forgotten my first Apple ID password so I just looking for this kind of solution…