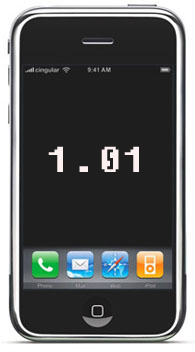 As detailed checks into the iPhone firmware itself have revealed modifications and additions to dozens of files, it would not be a surprise to see the list of 1.01 improvements and enhancements grow.

Officially, Apple has not updated it's release notes regarding the 1.01 firmware. Until they do, we'll have to continue depending on user reports to determine exactly what the update contained.