Canceling your Periscope account is not easy. If you no longer want to use Periscope the best thing to do is to tap the user icon in the bottom right hand corner, then tap the Profile icon in the top right hand corner. From here scroll down and tap Logout. You can then delete the app from your device and never use it again. If logging out is not enough you can have your account deleted by contacting Periscope. Here's how to delete your Periscope account, according to Twitter:

Periscope is a free broadcasting app owned by Twitter that allows users to livestream videos from around the world. You can search the app for live broadcasts and user profiles, but you can't locate archived videos of past streams over 24 hours old. You can view some completed live streams by tapping the TV icon located on the bottom toolbar. This will give you a list of live streams that ended in the past 24 hours from users you follow. You can also view older live streams if you have a direct link to a saved web replay or if a user uploads the video to another service, such as YouTube.

GoPro owners can now stream live video using the Periscope app on their iPhone. Periscope made the announcement on their blog on Tuesday. The blog app also includes a set of instructions (see below) on how to get started. 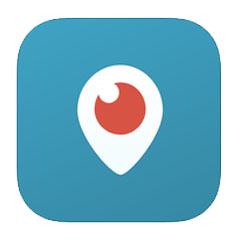