The popular photo sharing site Flickr first launched its native iPhone app in September 2009. The latest update, version 1.2, is now available on iTunes and takes advantage of new features in the iOS 4 operating system. Multitasking allows photo and video uploads in the background instead of preoccupying the iPhone until the task is complete. A badge on the app icon indicates how many uploads are processing. 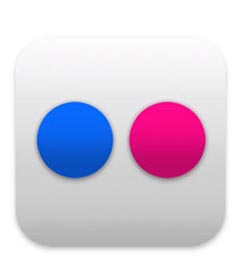 Fast app switching means that every time you open Flickr, the app will remember exactly where you left off last time the app was used, and you can continue what you were doing. HD video upload capability will be useful for those iPhone 4 owners who enjoy recording 720p video on their devices. Hopefully Flickr will add high-resolution support for the Apple retina display in the next update.

Aside from these improvements, Flickr makes it simple to upload images from anywhere with cellular data service, and makes it possible to geo-tag photos using the iPhone built-in GPS. Images from anywhere can be searched and browsed, as well as photos uploaded by family, friends and other contacts. Videos and photos are organized into sets and tagged to help others find the content.

The planet you live on sounds like a terrible place. Come back to earth.

Go back in your cave, and off the Internet, troll.