Guess the Jew was a game made popular by shock jock Howard Stern in the 80s, but a French anti-racism group didn't find it funny when a French version of it appeared in the Apple app store. The app entitled "Juif ou pas Juif?" was selling for 0.79 euro cents ($1.08) in France until Apple pulled the plug after complaints. The group SOS Racisme argued that the app, which allowed users to determine if a list of celebrities were Jewish or not, violated a French law that outlaws compiling of people's personal details. 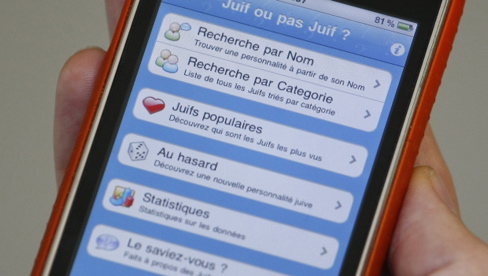 App developer Johann Levy told the Le Parisien newspaper that he's not a spokesman for "all Jews" and he meant for the game to be "recreational."

"As a Jew myself I know that in our community we often ask whether a such-and-such celebrity is Jewish or not," Levy said ."For me, there's nothing pejorative about saying that someone is Jewish or not. On the contrary, it's about being proud."