Apple submits plenty of patents every year that never see the light of day, but a recent filing published in the database of the U.S. Patent and Trademark Office on Dec. 22 has a lot of people overly excited. Application 20110311895, filed in August 2010, reveals that Apple is looking into hydrogen fuel cell technology. Hydrogen fuel cells would allow batteries to last for weeks without recharging, and would also make devices lighter and slimmer. Too bad it is years away from reality. 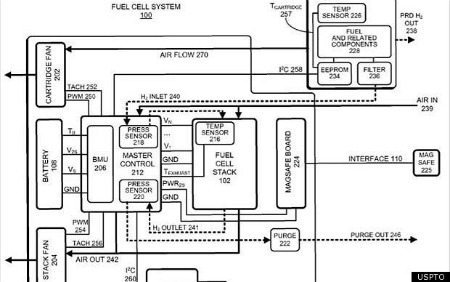 Even Apple acknowledges in their patent application that “it is extremely challenging to design hydrogen fuel cell systems which are sufficiently portable and cost-effective to be used with portable electronic devices.” Hydrogen fuel cells would also be friendlier to the environment eliminating the use of toxic chemicals for hydrogen.

"Our country's continuing reliance on fossil fuels has forced our government to maintain complicated political and military relationships with unstable governments in the Middle East, and has also exposed our coastlines and our citizens to the associated hazards of offshore drilling," Apple wrote in it's patent application.

So will your iPhone's battery ever last for weeks on one charge? Maybe, but probably not because of application 20110311895, and not anytime in the near future.