Sources describing the next iPhone have fallen into two camps, those who predict a complete redesign from Apple, and others claiming the device will remain much like the iPhone 4. Despite the appearance of several mockups indicating a radical departure from the current design, recent evidence points to a step change and possibly even a name that's more modest: the iPhone 4S. Much like the iPhone 3GS was just an iPhone 3G with improved hardware inside, it's looking more likely Apple could take this route with the next device. 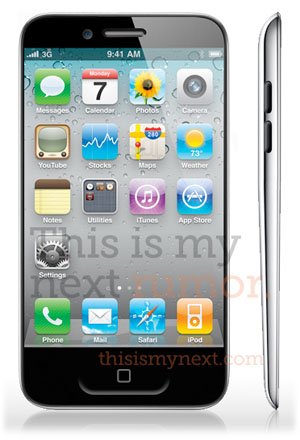 The design above illustrates one of the possible departures from the current iPhone 4 form factor, leading the next handset more in the direction of the iPod touch or iPad 2. Other designs have been described by some in the industry with mysterious sources at Apple and elsewhere that show a similar theme, metal back and slim profile without the silver external antenna so commonly discussed on the current model.

The late release of the white iPhone 4 this week and a lack of movement in typical Apple supply chains points to a September release. This is a different schedule for Apple, which normally releases an iPhone update in the summer. They have their hands full keeping iPad 2 units in stock around the world, and with the recent Verizon iPhone launch the market is already flush with new Apple hardware.

Select game developers have already received prototype models of the next iPhone, which appear to be iPhone 4 bodies with the next generation A5 processor inside. This is the same processor as the iPad 2, and represents a big improvement in performance over the current iPhone 4 processor, the A4. Some advocates of the radical redesign camp have explained that the iPhone 4S sent to game developers is just a cover for the iPhone 5, with the new designs disguised in an iPhone 4 body to throw off the public.

Other evidence of an iPhone 4S surfaced in Vietnam, where a device that looked exactly like an iPhone 4 was shown running an experimental version of iOS. The problem with these leaked prototype phones is there's no telling which ideas Apple will bring to market in a final consumer device. Reports have told of last-minute design changes that pushed back the next iPhone release until September, however it looks more likely that Apple is perfectly content to continue selling as many iPhone 4 units as it can manufacture. The company works on new devices way in advance, so the radical redesign camp may actually be mocking up the sixth-generation iPhone 5, launching in 2012.

In the meantime, look for the iPhone 4S in September. Reports indicate that Apple is passing on 4G LTE for now, however it's likely the technology will find its way onto the iPhone in 2012. These LTE networks are currently under construction by wireless carriers and will reach more customers by next year. When it comes to the iPhone 4, the Verizon model already has a dual-mode chip inside, capable of working on both the Verizon CDMA network and GSM networks around the world (including AT&T). Apple hasn't used the feature, but you can bet the next iPhone will have the same hybrid modem inside, making it possible to activate on either the Verizon or AT&T network.