Well the iPhone 5 rumor mill is in full swing, and reports are backing up claims that Apple's next generation device will come this summer with significant changes. Apple has already shifted some of its parts suppliers from Japanese companies to Taiwanese manufacturers Foxconn and Foxlink. This will likely lower manufacturing expenses for Apple, although it's not clear if the move will result in lower prices for consumers. 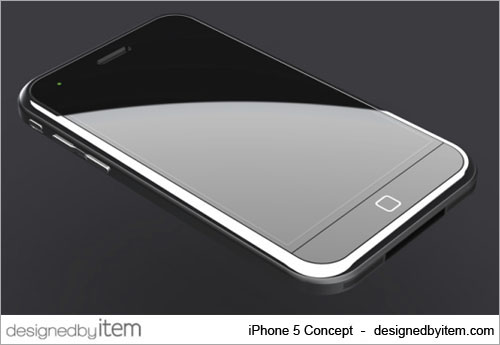 Next generation hardware is currently being tested by senior Apple employees on the Cupertino campus, and according to Engadget the device is completely redesigned. Pictured above is a concept designed by Item which emulates the current iMac line of Apple computers. To date, no photos or leaks have been detected that would give a clue as to what the iPhone 5 actually looks like.

When it comes to the iPhone 5 hardware, Apple is expected to release a new processor dubbed the A5 along with a hybrid Qualcomm baseband that would allow one iPhone 5 model to work on both the Verizon and AT&T networks. According to reports, the iPhone 5 will not support LTE, the latest and greatest network technology currently being rolled out by service providers.

The iPhone 5 could be slimmer thanks to patents including a redesigned, thinner touch screen and other improvements. The iPhone 4 antenna was tweaked for the Verizon network and those who have used the device report that the "death grip" experienced by owners of the previous iPhone 4 could not be replicated. It's not clear whether or not the iPhone 5 will continue to sport external cellular antennas.

Chinese paper Commercial Times reported that Apple is scheduled to begin high volume production of the iPhone 5 starting in May, which would put the device on schedule for a June release. This matches Apple's history of annual iPhone updates. In related news, these manufacturers will produce a small pilot run of the iPad 2 starting in February. The only question remaining is will Apple even have time to release the white iPhone 4?