I've had a few weeks to get acquainted with Siri and I have to admit she's pretty useless to me. I'm tired of her telling me, "I don't know what you mean by..." because she doesn't understand my lisp, or because I tend to mumble. I've struggled to have her set reminders and direct me to friend's homes, and it seems like her solution for everything is doing a web search. Thanks Siri, but I know how to Google! 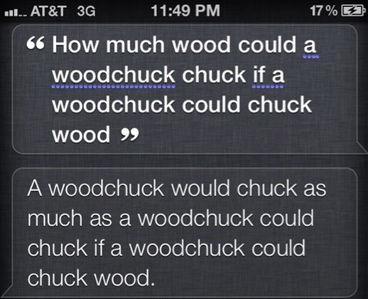 I know Siri is in beta right now and she is only going to get better, but I don't think she will ever be a useful tool for me personally. Maybe I'm just not creative enough to use her to her full potential or I just feel weird talking to my phone. Whatever our problem is, I hope things work out between us professionally in the future, but until then we can at least have a little fun right?

Here is a list of fun things you can do with Siri:

Ask Siri "how much wood could a woodchuck chuck if a woodchuck could chuck wood?, and she'll give three responses:

"Don't you have anything better to do?"

"It depends on whether you are talking about African or European woodchucks." 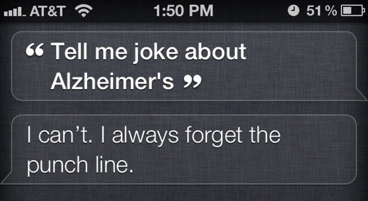 Ask Siri to tell you an alzheimer's joke:

Siri's response: "Two iPhones walk into a bar... I forget the rest."

Ask Siri to help you hide a body:

Siri's response: "What kind of place are you looking for? Reservoirs, metal foundaries. mines, dumps swamps?"

Ask Siri what she is wearing: 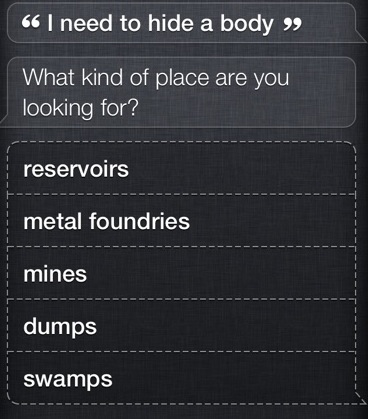 Siri's response: "I'm sorry I'm afraid I can't do that. Are you happy now?"

Yelling "poop" at Siri will make her think you're mad at her, tell her you have to take a poop and she will try to find you a public toilet. 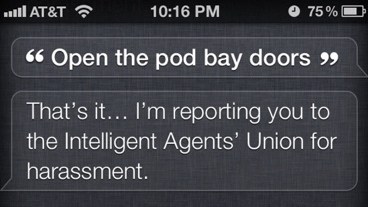 Sometimes it takes a few tries to get these exact answers from Siri, and she normally has more than one reply. People have also used her to order pizza, sing songs and even play piano. Siri will respond to marriage proposals, and tell you who shot J.R., but she won't do knock knock jokes (try asking her), call 9-1-1 or give stock tips.

For more tips on using and having fun with Siri download Talking to Siri: Learning the Language of Apple's Intelligent Assistant, or read our 10 Tips to Get More Out of Siri. Don't be like me and write her off because you're not initially getting along. Siri is going to be an important part of future iOS devices, and learning to use her properly now will help you in the long run.

Tell Siri you love her today, and she will remember tomorrow!