Apple promised a lot of new features for all iOS devices thanks to iOS 6, however, iPhone 3GS and iPhone 4 owners are being left out in the cold when it comes to the new Apple-developed Maps software. Pocket-Lint noticed some fine print foolery at the bottom of Apple's Maps page. It reads: “Flyover and turn-by-turn navigation will be available only on the iPhone 4S and iPad 2 or later.” 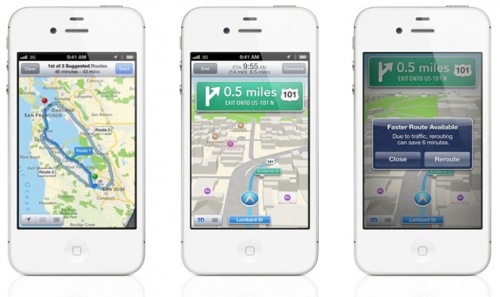 There is more bad news for iPhone 3GS owners. The device will not be receiving VIP List, Flagged Smart mailboxes, FaceTime and Offline reading. It's safe to assume that the iPhone 3GS will be discontinued in the fall when Apple is expected to announce their next-generation smartphone. However, iPhone 4 owners may be feeling a little burned by iOS 6 after its release.

Apple unveiled iOS 6 and at the WWDC in San Francisco on Monday. Some new features include Siri enhancements, FaceTime calling over cellular, a new Passbook app, and Do Not Disturb mode. Click here for a complete list of iOS 6 improvements.