Now all it takes to charge an iPhone is a few pieces of wood and the BioLite CampStove. This stove can boil a liter of water in under five minutes, and while the fire is burning electricity is generated to power the built-in USB port. Toss twigs, pine cones or any other biomass into the BioLite and flames will do the rest. 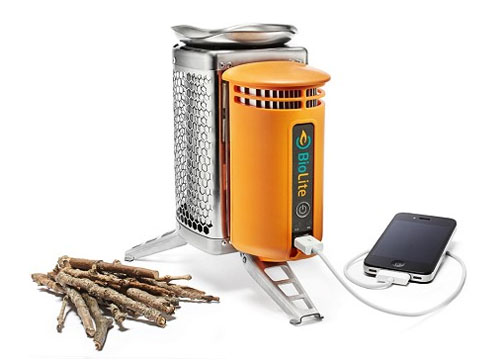 The stove works by converting heat from the fire into electricity, 2W continuously @5V with a peak of 4W @5V. This will charge any device at about the same clip as a notebook computer USB port. Using the BioLite makes it unnecessary to bring fuel canisters, phone chargers, solar panels and the like.

Although the CampStove weighs just over two pounds, since it doubles for cooking and charging it can save you from carrying some extra gear. According to BioLite, half the planet cooks on open flames. The company has developed larger stoves with the same technology to help people across the developing world access electricity by harnessing some of the energy given off while cooking.

The CampStove has an internal battery that can be charged via USB before heading out to camp, and ships with firelighter and a stuff sack. BioLite CampStove ships later this month for $129.