Earlier this week, ZiPhone was released and was the first tool available that provided not only a direct jailbreak for iPhones running 1.1.3, but did so in one step. Though pretty darn convenient, ZiPhone was still a command line application, which can scare off some of the less technically inclined iPhone owners out there. 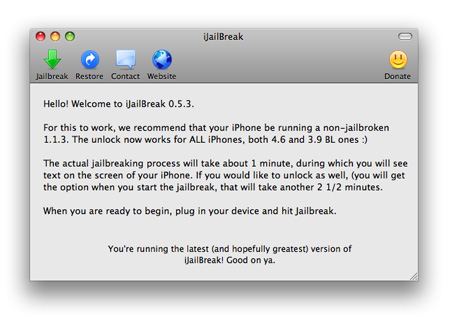 For those who dare not utilize their command shells and others who prefer a GUI application comes good news in the form of iJailbreak version 0.5.3, albeit only for

Mac owners. iJailbreak 0.5.3 works as a front-end for ZiPhone and allows essentially single click jailbreaking for 1.1.3 iPhones as well as all iPhone versions.

First, the unlock now works on all iPhones - regardless of whether you bought it this afternoon or on June 29. Second, we got some conflicing reports from our PowerPC users regarding iJailBreak working - some said it worked, others said it didn't. This update has re-ensured PowerPC compatibility for those running Leopard. If you're running any other version of Mac OS X, iJailBreak will not work.

iJailbreak will also unlock your iPhone should you choose to take advantage of that feature. The jailbreak is estimated to take approximately 1 minute. The unlock takes about 2 and a half minutes. iJailbreak can be downloaded from Google Code via this link.

has anyone tried this yet?