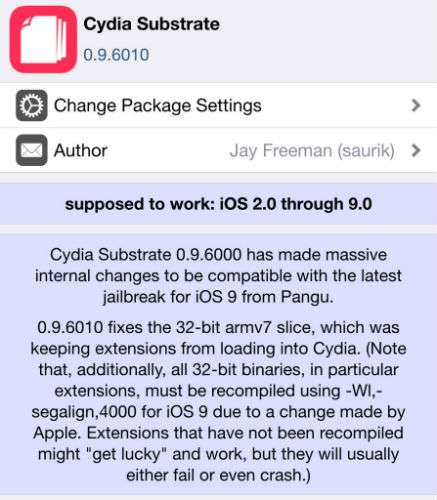 Team Pangu today released version 1.0.1 of their jailbreak tool. The updated fixes a "bug that leads to 0A error code" and a problem that was causing a loading failure on some computers. The changelog also notes that a Mac version of Pangu 9 is "coming soon". If you were having issues installing the iOS 9 jailbreak tool on your device, you can try again by downloading Pangu v.1.0.1 through en.pangu.io. Pangu 9 is currently only available to Windows.

Don't forget to backup your device and to follow all the instructions on the website before jailbreaking.

Saurik also updated Cydia to version 0.9.6010. The update "fixes the 32-bit armv7 slice, which was keeping extensions from loading," according to the changelog. While this means Cydia is now compatible with the Pangu iOS 9 jailbreak, it does not mean that all tweaks and JB apps will work while running iOS 9. You will have to wait until developers update their individual tweaks with iOS 9 support.