Creators of f.lux respond to Apple's Night Shift in iOS 9.3

F.lux has been freely available for desktop computers, the iPhone and the iPad since 2009. Once installed, f.lux slowly and automatically adjusts displays to warmer hues as the sun sets in your location. The software can be customized to remove more or less blue light from the screen, and includes other goodies such as Darkroom and Movie modes. The only stumbling block for iOS users is that f.lux requires a jailbroken device to install. 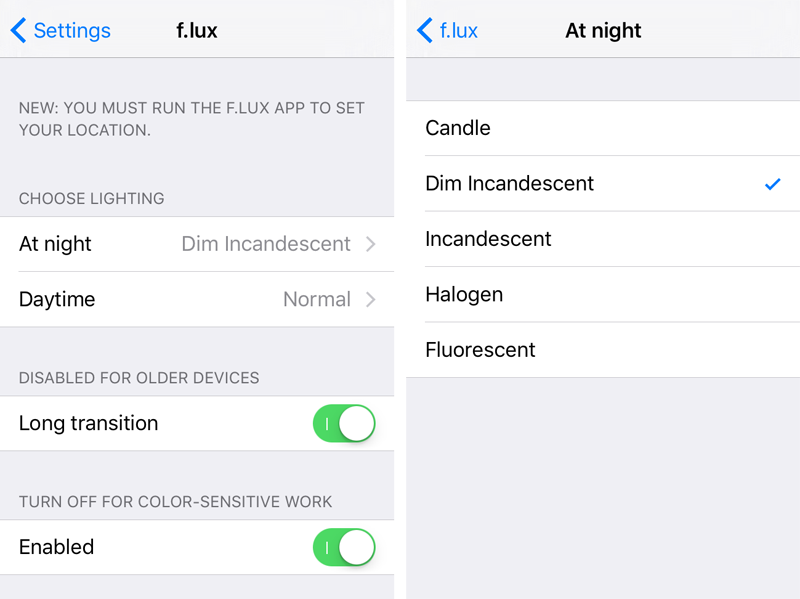 The developers of f.lux are seeking to change all this in an open letter responding to Night Mode, asking Apple to allow f.lux on iOS devices. Highlights from the response, posted on the f.lux website are below:

Apple announced this week that they’ve joined our fight to use technology to improve sleep... Apple’s involvement in fixing this problem is a big commitment and an important first step. We’re proud that we are the original innovators and leaders in this area.

Today we call on Apple to allow us to release f.lux on iOS, to open up access to the features announced this week, and to support our goal of furthering research in sleep and chronobiology. As we continue to innovate and improve upon our ideas, we remain hopeful that we will have the opportunity to offer our best, new work to everyone who wants it.

Time will tell if Apple opens the door to Night Shift, or retains the feature as a proprietary solution on iOS devices. In the meantime, jailbreakers can install f.lux using Cydia. iOS users can also sideload Gamma Thingy to adjust screen color, no jailbreak required.

I think about two years ago I used this F.lux software on my Laptop. I think Apple should allow F.lux on iOS devices. Because this plan was developed by F.lux developer first. Although, I am not going to use this feature neither on my iPhone nor on my Laptop. Because this yellow light is really irritating. I think it is better to use screen protector like "ocushield" than using this feature.