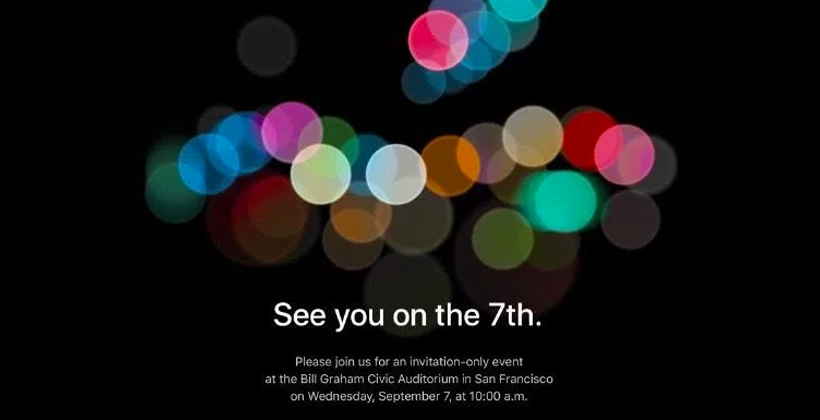 The wait is almost over. Apple has made September 7th official with an email invitation to the media. On this particular Wednesday, the company is expected to reveal several new products. The event is scheduled to take place at the Bill Graham Civic Center in San Francisco at 10 am Pacific. The bokeh effect seen in the invite image has led some to speculate that the event will focus heavily on the dual-lens camera featured in the iPhone 7 Plus.

In any case, September 7th will introduce the iPhone 7 and iPhone 7 Plus to the world. Reports have also pointed to additional products that could be announced on the same day. Here's a rundown of what's expected next week.

The iPhone 7 has redesigned antenna bands, a larger camera lens opening, and will come in a darker space gray color (similar to space black). A new blue metallic color has also been rumored, and of course the device will ship with iOS 10. Internals will be upgraded to the A10 processor, and the 3.5mm headphone jack will be removed in favor of Lighting headphones. Some have said the iPhone 7 will be waterproof. The iPhone 7 will come in storage tiers starting at 32GB with the top-end model holding 256GB of storage.

The screen size and an extra gig of RAM, bringing the total to 3GB differentiates the Plus from the standard model. In addition the larger handset will feature a dual-lens camera. On the more far-fetched rumor side of things, there are some sources indicating the Plus model will feature a Smart Connector like the one on the iPad Pro.

The new Apple Watch could debut on September 7th, with the addition of GPS and a larger internal battery. While the external design is not expected to change much, watchOS 3 along with slight improvements will make the Apple Watch 2 a better product. Apple may even continue to sell the original model at a lower price point.

The upcoming MacBook Pro will be thinner, sport USB-C ports and include Touch ID. Leaks have indicated the MacBook will include a customizable OLED touchscreen integrated into the keyboard. This would provide dynamic function keys and another way to interact individually with apps. While these computers are definitely on the horizon, it's far from confirmed that Apple will reveal these models on the same day as its new mobile devices.

Apple will make the September 7th media event available live online. In just over a week, the crescendo of iPhone 7 speculation will finally come to a close.