Will the iPad Bring Hulu to the iPhone?

A report filed a few weeks ago on The iPad Guide brought to light rumors that Hulu was developing and iPad application or a version of its popular video sharing site specifically for the iPad. In other words, the folks behind the technology at Hulu were at work creating a version of Hulu that didn't require Adobe Flash. In regards to Mobile Safari and Flash support, the capabilities of the iPad and the iPhone are seemingly identical, meaning that a Hulu for the iPad would be expected to work on the iPhone as well. 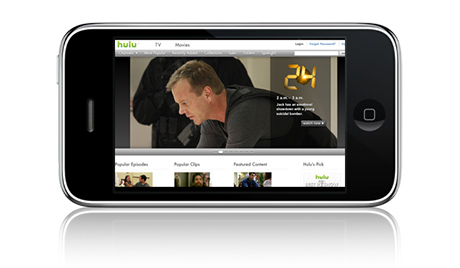 As The iPad Guide article suggests, "the same limitations presented by the iPad are those that have kept Hulu from the iPhone. Any effort by Hulu to develop an iPad-compatible version of Hulu would, in turn, create a version of Hulu that is also iPhone compatible. So, the proper question might be, if Hulu has a non-Flash version of their website in their wheelhouse, then what has kept them from building it for the iPhone?"

Unlike YouTube, who had to re-encode all of their videos in order to bring them to the iPhone, Hulu already

natively encodes all of its video content in H.264. Hulu's reason for using Flash is to interject advertising into their video content. Thus, Hulu's only roadblock to overcome is finding a way to managing advertisements without the use of Adobe Flash.

It indeed seems as though Hulu would be compelled to reach an ever-growing audience of iPhone and iPad users by building a version of its site, or an application, which fell within the abilities of the iPhone OS (on which both the iPhone and the iPad run). If the iPad ends up being the impetus that finally delivers Hulu to iPhone owners, hopefully it won't be the last of the rumored gifts that the iPad brings to the iPhone (multitasking, anyone?).