Movie fans can get even more information from the IMDb iPhone app thanks to an update to version 3.2 now available. This marks the first time since December 2012 that IMDb has received a major update, one of several since the initial launch of IMDb in late 2009. The key to IMDb is accessing information about all of your favorite movies on the go.

More facts have been added including actor heights in the personal details section, and worldwide movie release dates. The developers of IMDb have also made things more visually appealing for iPhone owners, with a fresh new page look for movies and celebrities in the app. Speaking of which, IMDb now clocks over 5 million people and 2.5 million titles in the catalog.

IMDb has made it to iPhone! The IMDb application is available now for free on the App Store. Look up every piece of information you could possibly want to know about your favorite movies. 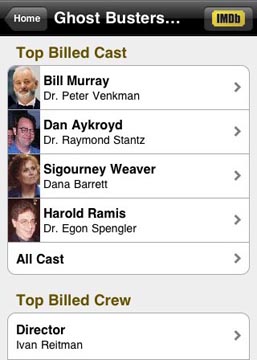 The application provides free access to the entire contents of IMDb (Internet Movie Database). No more poking around with Safari to get information.