Philip Schiller, senior vice president for worldwide marketing, gave Apple's keynote address at the Macworld Expo in San Francisco yesterday. Apple's stock (AAPL) gained $10 to peak at $97 in a wave of excitement over the affair, but has since lost roughly $6. This may reflect disappointment over the lack of groundbreaking announcements at the event.

It certainly comes as no surprise that Apple (AAPL) is selling plenty of iPhones. Just how many, however, may. According to Steve Jobs, speaking this morning during Apple's 2008 Macworld expo, Jobs announced that Apple has sold 4 million iPhones to date. That's right, 4 million. As today also marks the 200th day since the iPhone went on sale on June 29th 2007, that translates neatly into 20,000 iPhones sold every day.

Macworld 2008 is here and underway, and although nothing exciting has been announced just yet (the vent is still in it's kickoff stages), there's already something worth talking about. Even though you aren't able to see the keynote live without press privileges and a plane ticket - you will be able to see the keynote shortly thereafter. 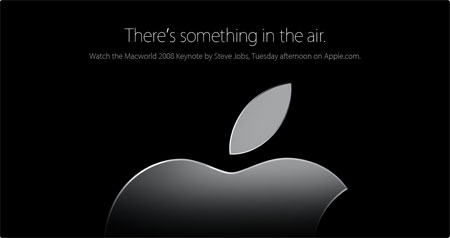