Well this time it's not the antenna, privacy issues or in-app purchasing. Now that the white iPhone 4 is on store shelves, the matter or its dimensions is causing a stir. Turns out the white model is 0.2 millimeters thicker than its black cousin (for the record that's 0.008 inches). 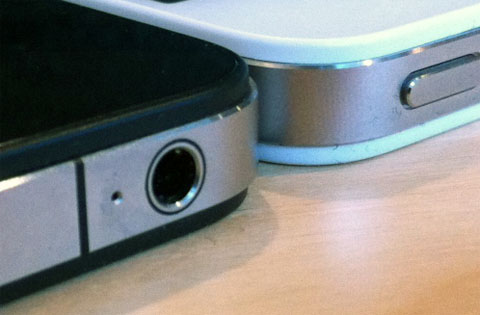 Credit for the photo above goes to Ryan Cash, who has posted several others on his blog comparing the two different units. He claimed that the 16GB white iPhone 4 immediately felt thicker in his hand compared to his 32GB black model. Now iPhone owners are scrambling to try different cases and make sure they fit on the white version.

Official Apple specifications list the iPhone 4 as having a thickness (depth) of 0.37 inches (9.3 mm). There's no separate listing for the black or white models, so the difference in thickness has left white iPhone owners scratching their heads. After a ten-month delay, Apple finally was able to solve manufacturing issues and offer the white model that was announced last year. In a recent interview, Apple executive Phil Schiller told All Things Digital, "It was challenging. It’s not as simple as making something white. There’s a lot more that goes into both the material science of it - how it holds up over time…but also in how it all works with the sensors."

Apparently changing the color affected many of the components and also required extra ultraviolet radiation (UV) protection to keep the exterior protected during sun exposure. It's not clear if the UV coating had anything to do with the thicker profile of the white model, and Apple has not commented on the change in size. In the meantime, some tight snap-on cases might be too snug for the white iPhone 4. Anecdotal reports so far point to most cases fitting, however if you're in the market for the white device double-check the case for compatibility.

It remains to be seen whether or not this change will dramatically fragment the iPhone 4 case market like the Verizon iPhone did. A change in the mute button placement led to several GSM iPhone 4 cases not fitting on the CDMA design. 0.2 mm shouldn't cause too much of a problem for most case designs, although Apple still has some explaining to do regarding the change in specifications.

> He claimed that the 16GB white iPhone 4 immediately felt thicker

Get out a ruler and see (if your eyes will allow it) just how small each little speck is on the millimeter scale.

Then take 1 *FIFTH* of one of those very tiny lines.

There's no way any human can touch 2 items and immediately tell you "oh, this one feels 0.2 mm thicker".