Apple is patenting technology that could help stop illegal pirating of musicals, concerts and movies. The new technology would allow movie theaters to use infrared beams to shut off iPhones being used to illegally bootleg. Similar to the same technology theaters use to send audio to individual hearing-aids for the hearing impaired.

Another way the technology could be used is to create free viral marketing. Take a concert for example, a band could surround the stage with infrared transmitters that watermark the videos or pictures you capture. If you decide to record the latest Black Eyed Peas performance, and share it on your YouTube page, the video would be stamped with Blackeyedpeas.com. 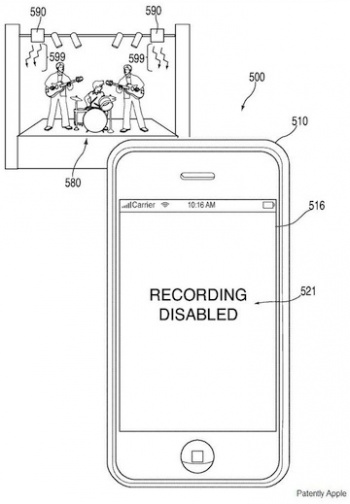 The tech is more than just a Big Brother device, the same IR beams could be used to enhance some experiences by transmitting information to your iPhone about certain items; like information about a sculpture or painting at a museum.

Although I wouldn't want to see Hollywood encourage cell phone use in theaters, they could use the technology as a gimmick. Imagine iPhone sponsored movies where your phone interacts with you during the film. Kind of like Popup Video! Okay, maybe that is a little farfetched, but it would be cool if Steve Jobs became a modern day William Castle.

I should also note that Apple applies for a lot of patents that don't come to pass. So your days of waving lighter apps at concerts aren't numbered yet.