Developers have until February 1, 2014 to ensure that all app submissions to Apple are optimized for iOS 7. Updates to existing apps as well as new apps are affected by the deadline, which requires developers to utilize the latest Xcode 5. Apple is likely responding to the fact that three quarters of iOS users have installed iOS 7 since its launch three months ago. 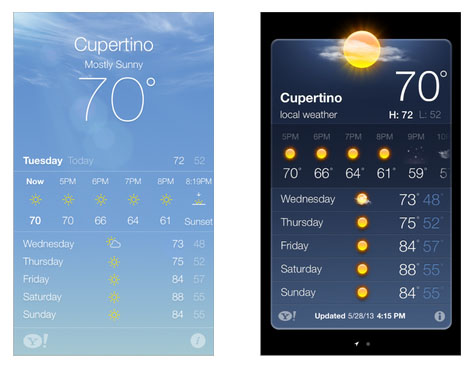 Apple announced the new policy in a document titled "Make Your Apps Work Seamlessly with iOS 7". The news blurb also links to the official Designing for iOS 7 section under Apple's iOS Human Interface Guidelines. Building apps with Xcode 5 means access to APIs added to iOS 7 and 64-bit support for hardware such as the iPhone 5s.

In the iOS 7 design documents, Apple cites three main themes: deference, clarity and depth. Basically, the content and functionality of the app should never be overpowered by the user interface. Apple also explains how the company went about redesigning its stock iOS apps:

- First, strip away the UI to expose the app’s core functionality and reaffirm its relevance.
- Next, use the themes of iOS 7 to inform the design of the UI and the user experience.
- Throughout, be prepared to defy precedent, question assumptions, and let a focus on content and functionality motivate every design decision.

Developers have two months to prepare submissions to the App Store conforming to the iOS 7 optimization rules and recommendations. The jump from iOS 6 to iOS 7 is the most significant redesign of the mobile operating system since it was first launched by Apple in 2007.

Find out more information on the iOS 7 adoption rate, app submissions reviewed, and other help for developers at Apple's App Store Distribution page.

the old one looks better in my opinion