iPhone users were left severely displeased yesterday after blogger Arun Thampi uncovered that the iOS app Path was storing people's contact info and uploading it to its servers without requesting permission. Path’s CEO Dave Morin issued an apology and a new version of the app today, but many iPhone owners were left wondering what other applications collected personal information without their knowledge. 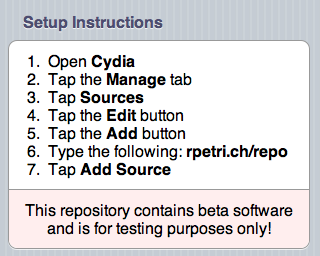 Developer Ryan Petrich created a jailbreak tweak that warns iPhone owners when an app is trying to access their contacts database. You can download ContactPrivacy from Petrich’s repository for free at http://rpetri.ch/repo. The tweak doesn't add any new icons or settings to your iPhone, but it should give you the option to block an application from accessing your information.

Petrich's warns some apps won't work if you revoke their access, but if you're worried enough to block them, then you probably don't want to use the app anyway.