Every time a new technology surfaces that could be used in a portable electronic device, the iPhone seems to pop up. Apple likes to be ahead of the curve, and there's no doubt the company is always on the lookout for better ways to power their mobile offerings. Enter the NEC Organic Radical Battery (ORB), which was first announced in 2005. 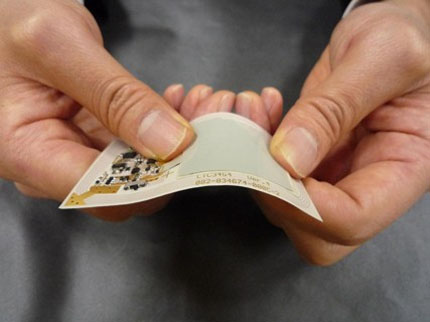 With a recharge time of just 30 seconds, the ORB breaks new ground. Not only this, but the revamped battery contains no heavy metals like current lithium rechargeable batteries. That means recycling or disposal of the ORB doesn't involve any toxic materials.

As if this weren't enough, the ORB is flexible and clocks only 0.3 mm thickness. The radical new battery design retains 75 percent of its charge after 500 cycles, which makes it practical for inclusion in mobile devices. According to International Business Times, Apple is "expected" to use the ORB in the next generation iPhone.

Although the technology has been in development for some time, it's not clear whether or not the ORB can provide enough power to equal the current iPhone 4S lithium-ion polymer battery at 1432 mAh. The capacity of a recent research battery over at NEC is described as only 3 mAh. Despite the the 0.3 mm thickness, many similar battery cells would have to be combined to produce the output of the current iPhone battery.

As great as an ORB-powered iPhone 5 might sound, with Apple expected to launch new hardware in late summer or early fall, it doesn't sound like the technology is ready for prime time. Hopefully Apple is working with NEC on improving the ORB so it can be installed in a future iPhone.

Now there are more leaks of the iPhone 6G. Here is the video
https://www.youtube.com/watch?v=pQ6WM5m63fU