MobileMe is going away forever. Current users have until the end of the month to download photos and files from iDisk, Gallery and iWeb before the service disappears. Final warnings are being distributed via email to subscribers after Apple announced the end of MobileMe last year. 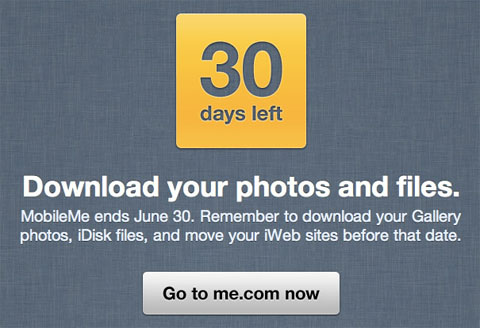 MobileMe users were granted storage space online for $99 per year. Now with the advent of iCloud, which offers 5GB free, Apple decided to close down its precursor. Those planning to transition their MobileMe content to iCloud must complete the process by June 30 to prevent the loss of data.

According to AppleInsider, Apple has been taking steps to encourage MobileMe users to transfer to iCloud. In April the company offered MobileMe users a free copy of Snow Leopard. Subscribers also have the privilege of 20GB free storage on iCloud until September.

iCloud launched with iOS 5. The service seamlessly backs up and syncs content across several mobile devices and Mac computers. iCloud stores photos, documents, music, books, apps, calendars and contacts without any interaction from the user. To use iCloud you must be connected to a W-Fi network, then your files are automatically transferred.

Apple is expected to launch several new features in iOS 6 as well as new iCloud functionality. According to reports, the company will announce their mobile software plans at WWDC later this month.