Will You Use the New iOS 6 Privacy Settings or Just Ignore Them?

Apple has added a new security feature in iOS 6 to put an end to apps accessing personal data without permission. The new privacy settings come after it was discovered that the Path app was collecting and transmitting users' contact info without their knowledge. Users will have the option of giving an app permission each time it wants to access their contacts, calendars, or any other data. Users will also be able to specify which apps can access which data via the Settings app. This sounds like a great feature for iPhone owners who are concerned about keeping their personal data private. However, Andrew Storms, director of security operations for nCircle thinks differently. 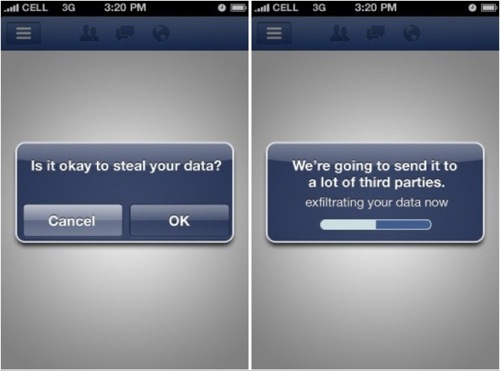 "Instead doing the difficult work of putting together a privacy policy that has some teeth or going after app developers already violating policies, Apple has basically decided to annoy their users by requiring them click through a dialog box for just about every app on their phone. These dialog boxes are going to be like one of those whack-a-mole games - exactly the kind of thing users despise and ignore completely. This approach adds no value to Apple users, it's nothing but a CYA for Apple lawyers. "

Storms believes users will either turn off the permissions dialog box, or just flat out ignore it by blindly clicking "OK". Just like we all do with those long terms and conditions that we always accept without reading. Storms says Apple's new dialog boxes should look more like the mockups posted above.

Storms is probably correct, a lot of people will most likely skip the dialog box to quickly access their apps, but the new settings are great for those who do not want Facebook secretly uploading their contact info.