The iPhone 5 release has pushed Apple over the top. Regaining its lead for the first time since March, Apple's iOS smartphone sales are once again dominating the US market. According to Kantar World Panel, Apple is on track to surpass the previous high of 49.3% of smartphone sales seen after the iPhone 4S launch. 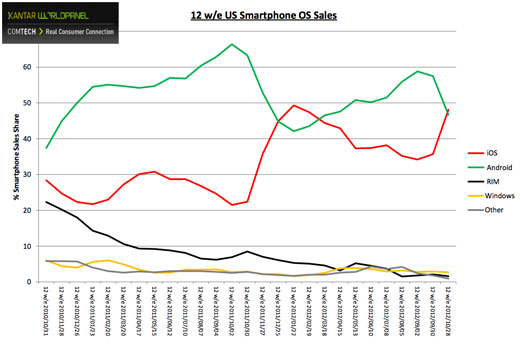 Second place Google Android is not far behind at the moment, but the devices have seen a sharp decline in sales with the iPhone 5 launch. Google's share of US smartphone sales had surpassed 65% just one year ago. While Windows and other smartphones linger at the bottom, BlackBerry maker RIM has seen a steady decline in US sales over the past two years.

More good news for Apple is the fact that iPhone customers are loyal, preferring to stick with the iPhone when upgrading. The ratio of upgrade buyers to new users is currently 60:40, which means that Apple is still managing to acquire new iPhone users. In the survey, 92% of iPhone owners said they would stick with Apple for their next smartphone.

There were some tough spots for Apple. Android tends to lead overseas, clocking 74% of sales in Germany and 82% in Spain. Apple's iPhone could only muster 0.4% of Brazilian smartphone sales and 4% in Spain, for example. Still, iOS has been doing well in the UK and Australia, with 33 and 29 percent of sales respectively.