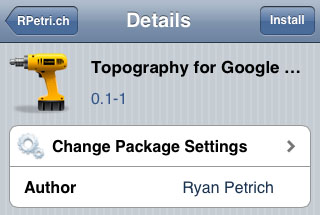 The tweak is called Topography for Google Maps, and once installed there are no options to configure. Simply open the Google Maps app and Topography will be an option in the sidebar. Before you can download the package, you must add Ryan Petrich's repository to Cydia by following these steps:

Once you have added the repo you can browse the list of packages and install Topography for Google Maps. The tweak is free of charge. No word on whether or not Google plans to add topographic maps to a future release of Google Maps for iOS.