Ever use emoji when composing a new MMS or iMessage? Even if you haven’t, the concept is simple. Switch keyboards using the globe key and you’re presented with a bunch of little pictures instead of the letters you normally see. Pressing one of the emoji icons will embed the picture right into your outgoing message. 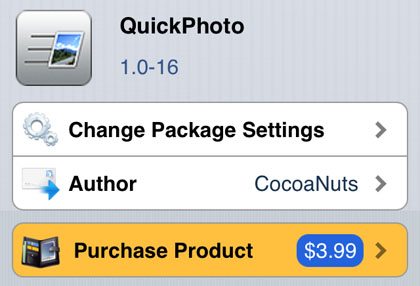 The QuickPhoto tweak does the same thing for actual photos stored on your iPhone. This makes the process of adding pictures or videos from your camera roll and albums faster than the default procedure. Once installed from Cydia on your jailbroken device, simply tap the globe key to bring up the camera roll “keyboard”.

All of the images on your iPhone will be accessible, including the camera roll, albums and photo stream. You can even tap and hold an image for a high-resolution preview right in the image picker keyboard. Several apps are supported by QuickPhoto besides the stock Messages app, including Messages+ and BiteSMS. Because the image picker keyboard is accessible from the globe key, you can even use the tweak in Mail, Twitter, Facebook Messages, Facebook Messenger and more.

QuickPhoto is available on Cydia from the BigBoss repo for $4.99. Check here for instructions on how to jailbreak iOS 6.x with evasi0n. You can also find out how to purchase and install Cydia tweaks with this guide.