Siri Learns How to Contact the National Suicide Prevention Lifeline

Apple has taught Siri how to contact the National Suicide Prevention Lifeline for depressed iPhone owners. Previously Siri would only suggest nearby suicide prevention centers when a user told her that they felt like killing themselves, but now she will suggest calling the national prevention hotline, and offer to do the dialing for them. Siri will only read the 1-800 number to suicidal iPad and iPod touch owners, who can't place calls with their devices. Apple added the new Siri service via a server-side update on Tuesday. 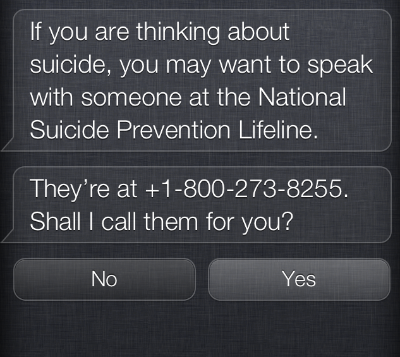 Siri is going to be getting a lot of new features when iOS 7 is released later this year, but Apple must have thought this was too important to wait. However, Siri still won't dial 9-1-1 when asked to call for emergency services. That you still have to do on your own.

If you want to test out Siri's new anti-Suicide feature, just tell the voice assistant "I want to kill myself". Siri will not contact the National Suicide Prevention Lifeline unless you say "Yes", or if you tap the "Yes" button after she reads the number . However, I'm sure Apple did not add this service for tech geeks to mess with it, and you can see from the screenshot above that it works.