Another report has surfaced indicating Apple plans to launch its next iPhone with a built-in fingerprint sensor. This time KGI Securities analyst Ming-Chi Kuo explains that a new home button design will be convex instead of the current concave design, to accommodate the fingerprint sensor. The sapphire component will prevent scratches, much like the sapphire camera lens cover currently found on the iPhone 5. 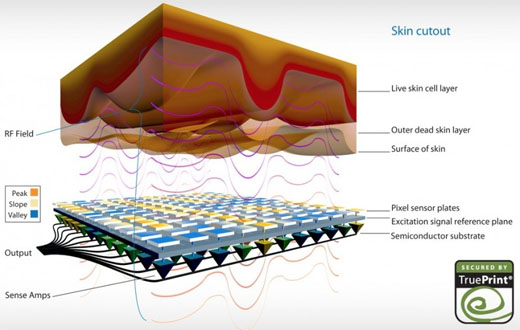 As MacRumors notes, Kuo has a decent track record offering information on upcoming Apple products. Kuo speculates that the iPhone home button provides the perfect place to use fingerprint sensor technology, and that Apple's use of AuthenTec technology would be advantageous. While many fingerprint sensors use optical recognition, this method can be affected by dust and other contaminants.

The convex sapphire home button would use RF and capacitive technology instead, which would prevent recognition problems due to these contaminants. It's not clear exactly how a convex home button would affect the design and use of the iPhone 5S, as the Apple home button has not been changed since it was introduced in 2007. From the research note:

Various lines of code in iOS 7 verify a fingerprint sensor is actually in the works by Apple. So far, no leaked parts have been pictured to help verify the reports of a sapphire home button. Rumors of a fingerprint passcode replacement have been circulating for some time, ahead of the iPhone 5 release. Users concerned about security will find that fingerprint verification technology will save the extra step of entering a passcode, currently needed when accessing a locked iOS device.