Apple is known for having high quality cameras in its flagship smartphone. Now Sony has announced an accessory that could boost iPhone photography even further, the smartphone attachable lens camera. This new concept was leaked several times earlier this year, with photos previewing the devices ahead of Sony's official announcement. 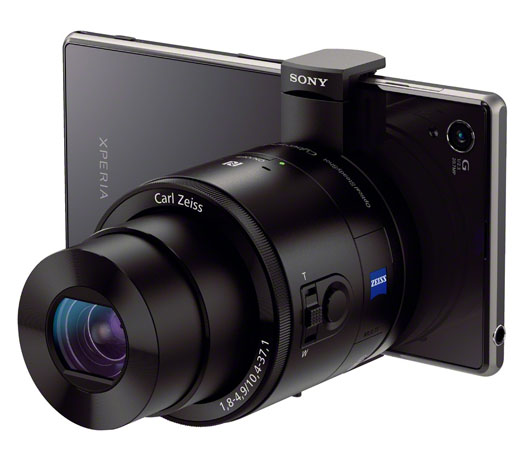 Now the details have been revealed, and two models of lens camera are available for pre-order ahead of shipping on September 28. These all-in-one lens and sensor units clip to any smartphone running the PlayMemories Mobile app, which is currently available for iOS and Android. The smartphone pairs via Wi-Fi to the lens camera, and acts as the camera display and controls.

The lens cameras can even be used independently from a smartphone, although functions will be limited by the lack of controls. A tripod mount, microSD card slot, and optical image stabilization are all built-into the units, while a microUSB port provides charging for the internal battery. Sony touts the lens cameras' low light capabilities and 1080/30p HD video recording, along with the PlayMemories Mobile app's ability to edit and share pictures instantly. Photos can be simultaneously saved to the microSD card and the iPhone when paired.

A lighter version, the DSC-QX10 actually sports a longer zoom with a 10x Sony G lens (f3.3-5.9). Sony also borrowed some parts from another camera, this time the DSC-WX150, which donated the 18 megapixel, 1/2.3-inch CMOS sensor inside the QX-10. This model is less expensive, providing the attachable lens experience for $249.99.

The Sony Cyber-shot DSC-QX10 is now available for pre-order from Adorama for $248.00.