The iPhone 5s Home Button is Not Repairable

The days of swapping out a broken home button in a do-it-yourself (DIY) iPhone repair are over. Now that the iPhone 5s features Touch ID, iMore points out new hardware security features that could mean more trips to the Genius Bar. This is a side effect of protecting fingerprint data by locking down the Touch ID components. 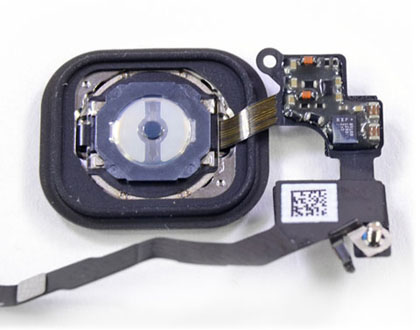 The image above from iFixit shows the fingerprint sensor and component cable assembly, which are uniquely linked to each individual A7 chip. This extra layer of security means that each iPhone 5s has its own Touch ID harware, which will only work with that specific device. Swapping out the assembly for new parts results in a nonworking Touch ID system.

While this could take some iPhone 5s repairs off the table for third-party companies and home hobbyists alike, the hardware lockdown provides unprecedented security for sensitive fingerprint data stored on a mobile device. As we already know, Apple does not send this data to iCloud; the information is kept in a special enclave on the A7 chip which is only accessible by the Touch ID system. No iOS apps can read the data.

With each fingerprint sensor uniquely linked to its own A7 chip, reverse engineering a fingerprint from the data stored on the device becomes even more difficult. Replacement Touch ID sensors that have been hacked to intercept the data would only work on one iPhone 5s, that is if the hack could be made to work at all. The built-in home button hardware means there is no way to compromise all iPhone 5s devices with a single hack.

Touch ID represents a great leap forward in security, however there is a trade off. iPhone 5s owners who are prone to damaging their handsets should take extra precautions, as any home button repair is sure to be more expensive.

Samsung fingerprints can all be read out (enumerated in their entirety) from any app on the device; their own SDK even ships with a utility which does this.
So - if you're wondering what the difference between Apple and Samsung is, when it comes to fingerprints - Apple is real security. Samsung is 100% fake.