The SIM card ejector tool is no longer shipped with new iPhones, however this small accessory made big headlines thanks to its composition. The tool was made of Liquidmetal, an amorphous metal alloy. These metals can be molded into thin, unique shapes while retaining incredible strength and durability, which could be perfect for mobile devices. 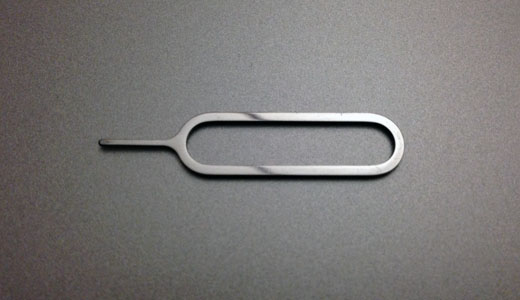 Liquidmetal Technologies inked an exclusive deal with Apple a few years ago, and now it looks like their work is bearing fruit. Patently Apple details five patents involving Liquidmetal, proving Apple is moving closer to manufacturing with this material. Two of the technically complex patents revolve around using Liquidmetal in a 3D printing process to create parts.

Interestingly, all five of the Liquidmetal patents include a list of potential products that could be manufactured using the inventions detailed in the applications. Patently Apple has the breakdown:

A telephone, such as a cell phone, and a land-line phone, or any communication device, such as a smart phone, including, for example an iPhone, and an electronic email sending/receiving device. It can be a part of a display, such as a digital display, a TV monitor, an electronic-book reader, an iPad, and a computer monitor.

It can also be an entertainment device, including a portable DVD player, conventional DVD player, Blue-Ray disk player, video game console, music player, such as a portable music player (e.g., iPod), etc. It can also be a part of a device that provides control, such as controlling the streaming of images, videos, sounds (e.g., Apple TV), or it can be a remote control for an electronic device. It can be a part of a computer or its accessories, such as the hard drive tower housing or casing, laptop housing, laptop keyboard, laptop track pad, desktop keyboard, mouse, and speaker. The article can also be applied to a device such as a watch or a clock.

The list is extensive, but what's important is that Apple seems to be making progress with Liquidmetal. If these manufacturing methods prove to be superior to existing methods, we can expect to see iPhones, iPads and more made of these alloys in the not-too-distant future.