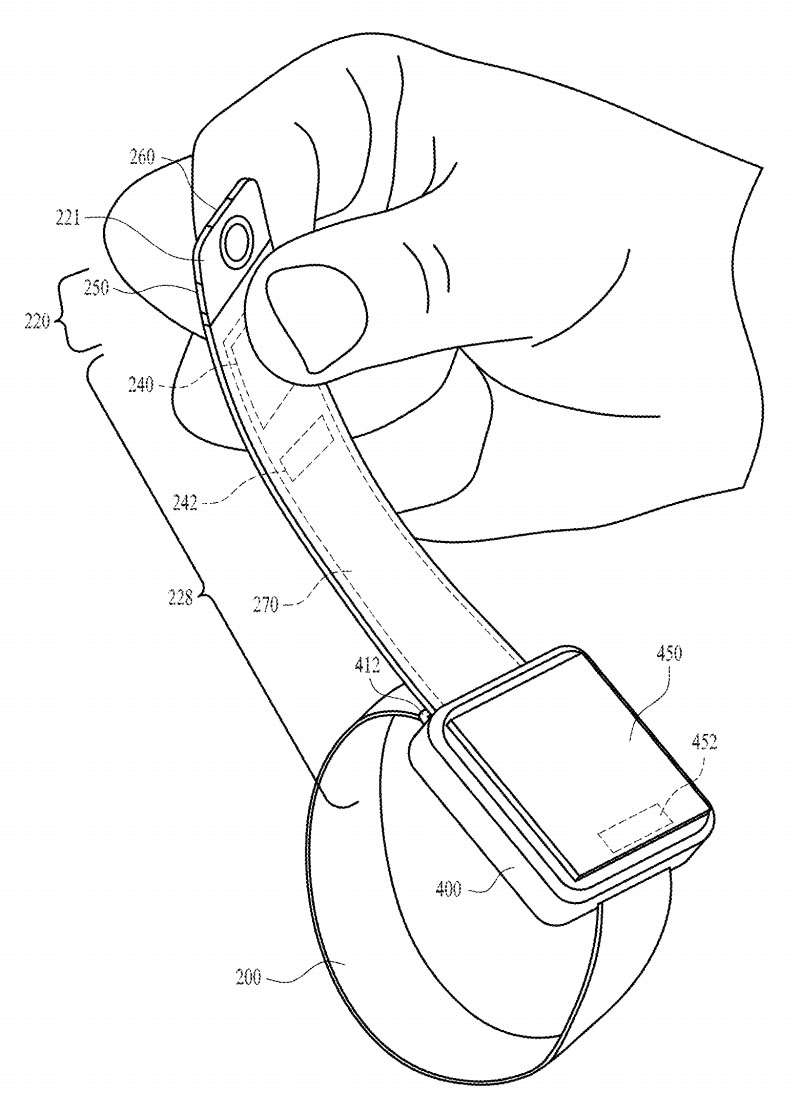 The dream of a completely self-contained Apple Watch came closer to reality with the addition of cellular data. While many functions of the iPhone can be accomplished with just the watch, taking photos is conspicuously absent. Third-party accessories which add a camera to the Apple Watch are available, but Apple has raised eyebrows itself with a recently awarded patent.

Unambiguously titled "Watch band with optical sensor," this patent details a possible solution to Apple Watch camera integration. Unlike fixed cameras, Apple envisions a flexible extension to the Apple Watch band, which would provide an adjustable camera lens for framing any scene. Once moved to the desired orientation, the watch band would stay put for image capture or FaceTime calling.

Taking a photo could be accomplished a variety of ways, by tapping the Apple Watch screen, pinching the camera band, or giving a voice command to Siri. It would also be possible to engineer the camera to be dual-sided, which could mean 360-degree video recording, or simply a quick way to switch between cameras when using FaceTime or capturing selfies.

The patent text explains why Apple may be considering such an addition to the Apple Watch:

A potential barrier to smartwatch adoption is their minimal image-capturing ability. Some embodiments described herein include a smartwatch with the functionality of a camera that is independently positionable relative to a watch body. This can allow the smartwatch to capture images and video at angles and orientations that do not depend directly on the angle and orientation of the rest of the smartwatch, including the watch body.

Adding a camera band to the Apple Watch would almost certainly mean that Apple's smartwatch could be used in places where lugging an iPhone is less desirable. The patent mentions activities such as hiking, running, swimming, surfing, and snowboarding, where capturing images or videos with the wearable Apple Watch would be easier than with other devices. As with previous Apple patents, it's unknown whether Apple's watch band with optical sensor makes it into a real product.