UPDATE: Found him! Thanks to everyone who commented and help me solve this achievement. To find the "hidden mortal reptilian combatant" tap the door in the cavern on the Darklight Depths map. Reptile will then appear in the top right hand corner of the screen near the pause button. He is hard to see like the 3 Predators you had to find to unlock the "Ugly $%@#" achievement, but trust me he's there. Tap him before he scales the wall and you will unlock the "You've Found Me" achievement. 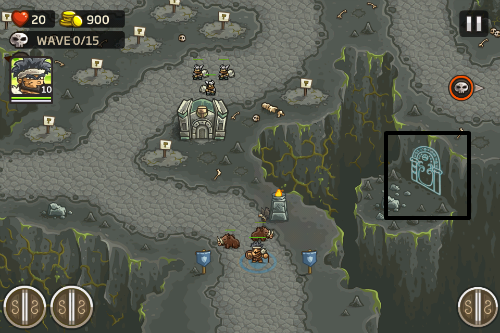 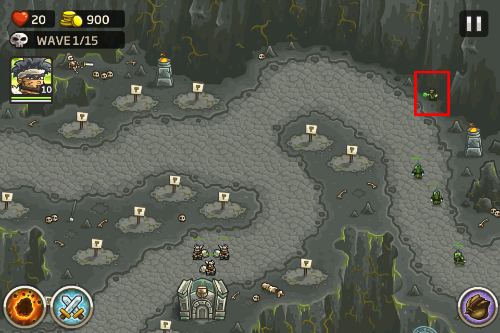 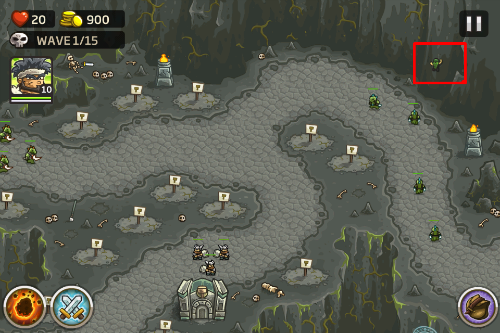 The "You've Found Me" achievement was added to Kingdom Rush: Frontiers via the holiday update in December 2013. The achievement reads "find the hidden mortal reptilian combatant," which is obviously a reference to Reptile from the Mortal Kombat game.

In the original Mortal Kombat players could unlock Reptile by earning a Double Flawless Victory and performing a Fatality. I'm assuming you have to do something similar on The Darklight Depths level to find the character and unlock the achievement, but maybe I'm over thinking it.

There is also a secret door in a cavern which you can tap to light up, but so far that's all I can figure out. If you have unlocked this new achievement please let us know how you did it in the comments section below.

UPDATE: I have unlocked the achievement thanks to the comments below. So far it seems random. Here's how I did it: I activated the glowing door mentioned above, then I randomly tapped the screen until the achievement was found. It worked for me when I tapped near the black pit next to the skeleton with the sword. It is still unclear if the mortal reptilian combatant can be found in the same spot by everyone or if he is just in random locations. It is also unknown if the door in the pit actually needs to be activated for you to find him.

There also seems to be a bug preventing you from getting the new boss achievement "I'm the Lizard King." Has anyone else experienced this?

Has anyone found any other Easter eggs on the Darklight Depths level?

Hidden combatant is found by tapping just below encyclopedia icon.

Perhaps a more specific tutorial is needed. I have no Idea how to do it....

Just tap the place at the up right coner, below the "pause" icon

I found it! It's a reference to the MK reptilian hint "Bottom of the pit":
I don't know if the Door of Moria-thing affects this achievement, but I had it activated when I got the achievement. I zoomed in and clocked on the black pit next to the skeleton with the sword on the top of the Darlight Depths map. I found it out by clicking on every spot from every black pit on that map, so perhaps the location of Reptile is random...

This works, unfortunately I'm not 100% sure how I did it either. I activated the door and just tapped around the entire Darklight Depths map. The achievement popped up while I was tapping around the black pit next to the skeleton with the sword just like you!

Actually. You can see the little green fellow at the top.
First: activate the door
Second: tap at the dark Canyon at the top. Wait for some seconds, you will see the combatant climbing upwards.

He is in the top right corner at the bottom of the mountain in the shadows
I do not know whether or not you need to tap the door first but he is definitely there
I took a screen shot but i cannot post it, sorry.

Thanks! I was able to grab a screenshot.

I don't think the door has significance. Also, I found two bugs, one where, after your reinforcements or rain of fire has cooled down and is ready for use, the icon still stays black, however the reinforcements/rain of fire can still be used. The second one is, the two new heroes speeds in the hero room aren't displayed. It's just some letters. I don't know if that is a bug, but if it stands for something, can someone please let me know. Oh well, those are all I could find!

Yes there is a new bug with the reinforcements and rain of fire icons. It also happens on any level not just Darlight Depts. Heh, and the hero's speeds read "todo". Odd maybe they just forgot to add them.