Jailbreaking iOS 7 is about to get more interesting. Saurik has released Cydia Substrate 0.9.5000, adding support for iOS 7 and the ARM64 CPU found in the iPhone 5s and other 64-bit iOS devices. This means that developers can forge ahead with updating tweaks and jailbreak apps for all devices running iOS 7. 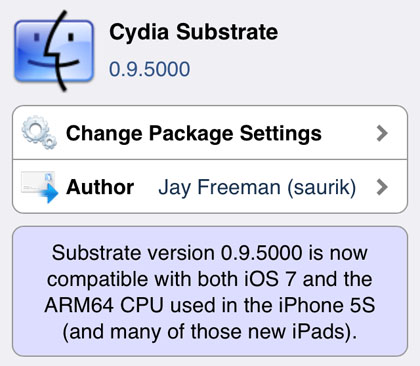 Previously there were some compatibility issues which prevented many tweaks from being usable with iOS 7. Saurik notes that for extensions to work on ARM64 they must be recompiled to ARM64 by developers. The news comes just days after the evad3rs surprised everyone by releasing the evasi0n 7 jailbreak.

Developers have already begun launching updated versions of tweaks and apps for iOS 7, the iPhone 5s and new iPad models. If your iOS 7 device has already been jailbroken, make sure to install the Cydia Substrate update immediately. Open Cydia, navigate to Changes -> Upgrade Essential.

MobileSubstrate (Cydia Substrate) is required for many jailbreak tweaks and apps to work, such as WinterBoard, Activator, and Five Icon Dock. The software provides a platform for code insertion that developers can use to modify jailbroken devices. The package works with Mobile Safe Mode, which protects jailbroken devices from faulty extensions.