Even though jailbreaking is more accessible to iPhone users than ever before, some may question whether or not apps developed outside the App Store are really necessary. The fact is that Apple limits some functionality for security and other reasons. Here are two great apps that make it possible to do more with your 3G connection if your iPhone is jailbroken. 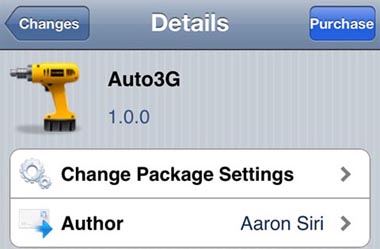 Auto3G switches your iPhone's 3G cellular data connection to EDGE (2G) automatically every time you lock your device. Why not stay connected to the 3G network when the iPhone is locked? Battery life, that's why. Your battery life can be extended when the 3G network is only used when necessary.

Auto3G essentially switches Settings -> General -> Network -> Enable 3G to OFF whenever the iPhone is locked, and switches it back ON as soon as the device is awakened from sleep. Version 2.0.3 is available now from BigBoss for $5.99.

Another useful 3G application is My3G. This app tricks other apps into thinking you're on a Wi-Fi connection when you're actually on the 3G cellular data network. Why would you want to do this? Imagine making FaceTime calls from anywhere over 3G! You can also watch HD YouTube videos and participate in VoIP calls without a Wi-Fi connection, among other things.

My3G offers several features such as the ability to select which apps are My3G enabled, built-in Default Apps, and an indicator that shows when the network is switched from 3G to Wi-Fi. My3G offers a three-day free trial then costs $3.99. If your iPhone is jailbroken then you're already halfway there. Just open the Cydia App Store and grab these two 3G app packages to make your iPhone even better.

Another good jailbreak app for 3G data is Data Counter, which was just released on cydia. It allows you to keep track of the 3G usage either monthly or daily.

i purchased an i phone 3 on a plan, the phone was faulty and the store I bought it from wouldn't give e a replacement they took over three months to fix the phone and of course I had to buy another one, I could not pay for the three months that i had no phone so they locked me ou.t Is there any way I can re enable my phone, I dont mind paying the place I bought the phone from, but fair is fair until i can use my phone I won't be paying for it can oyu help me