Know When a Friend has Read Your iMessage With TypeStatus Tweak

Apple's iMessage includes a nice feature that lets you know when someone has read your message and when they are typing a response (provided they have turned on "Send Read Receipts" in Settings -> Messages). If you want to see this information, however, you have to remain in the message app so you can see "read" or the animation notifying you that the recipient is typing a response. Now there is a jailbreak tweak called TypeStatus that will notify you when you are outside of the message app. 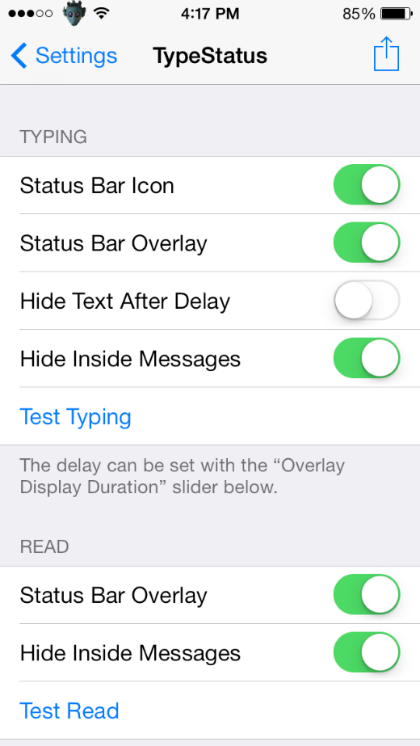 Once you have TypeStatus installed you will be notified by an overlay of your status bar when someone has read or is responding to one of your messages. The overlay will show the recipients name and either "Typing" or "Read." Go to Settings -> TypeStatus to customize the tweak's behavior. You can activate notifications

for "Typing" (when the recipient is typing a response) and "Read" individually, so if you wanted you could choose to only be notified when someone has read your message, not when they are replying. For "Typing" you can choose to have a status bar icon appear rather than an overlay, but this option isn't available for "Read" for some reason. You can choose to hide both notifications while you are in the message app (since it would be redundant) and you can set the duration of the overlay. You can also change the animation with the "Slide" and "Fade" toggles, so you could have the overlay do one or the other, or both.

This app might seem superfluous to some, but I know I've had times when I've been anxious to know if someone read my message, so I think it could come in handy. Not to mention, it's free. You can download it from Cydia's HashBang repository.