How to Create a Time Lapse Video With Your iPhone

Time lapse photography is a filming technique that uses a lower frame rate for capturing video than is used for viewing it, resulting in a video that appears to be sped up. For example, you might record people walking through a park at one frame per second and play it back at 30 frames per second, resulting in something akin to a Benny Hill chase. Basically it is the opposite of slow motion. This technique is ideal for capturing motion that is too subtle for the human eye to appreciate, such as star movement, flowers blooming or clouds developing. It is also good for seeing long term progress, like watching the construction of a skyscraper, from beginning to end, in just a minute or two. iOS 8 has added this functionality to the Camera app, so now you can make your own time lapse videos with your iPhone or iPad.

Creating your own time lapse video is quite simple. Open your Camera and scroll over and select the "Time Lapse" option. Now all you have to do is tap record. 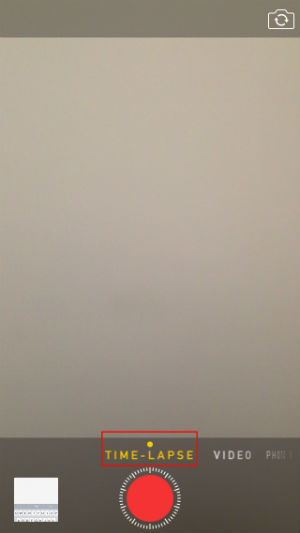 There aren't any advanced settings to play with. According to Apple, "iOS 8 does all the work, snapping photos at dynamically selected intervals." Dan Provost of Studio Neat did his own investigation into exactly what those intervals are:

Keep in mind that you'll likely want a tripod of some sort, or at least something to prop your phone against for the shoot. The object of a time lapse is to see one specific area change over time, so a wobbling camera won't do, and you probably don't want to hold the camera for that long anyway.