Apple today released the fourth beta for iOS 8.2. The update includes a "new panel specifically for pairing an iPhone with the Apple Watch" and it confirms that there will be a dedicated watch app, according to 9to5Mac. Previous builds of the new software have included support for Apple's WatchKit and a fix for an issue with blood glucose tracking within the Health app. 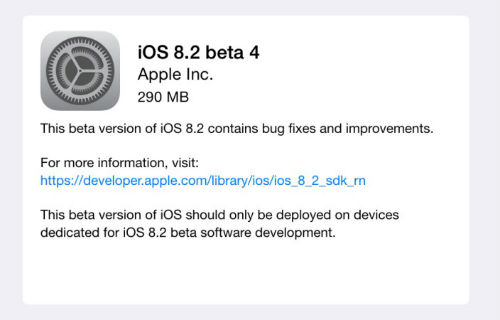 iOS 8.2 and the Apple Watch are expected to launch sometime in March. The smartwatch will be available in three collections starting at $349 for the standard edition. There will be several band options and 11 digital faces to choose from at launch. You can learn more about the Apple's smartwatch in our Apple Watch section.

iOS 8.2 is available now over-the-air or through the iOS development portal. The release comes three weeks after the last release and carries the build number 12D5452a.