Last month developer @MohammadAG showed the world it was possible to receive iPhone notifications on the Motorola Moto 360 smart watch. The work has continued, with his Android Wear device now able to answer calls from the iPhone. But that's not all. 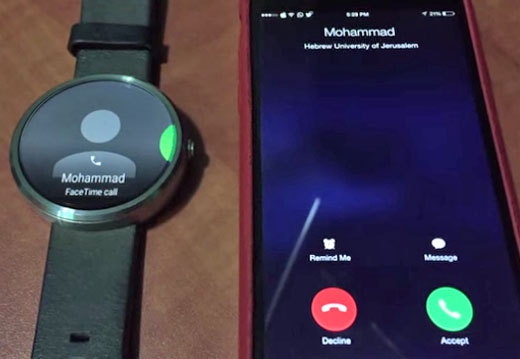 His latest tweets show the Moto 360 is capable of delivering low battery alerts, time syncing, and even controlling music when paired with an iPhone. Many have been wondering if and when this capability would be made public, or how difficult it might be to implement. Now thanks to a major discovery, it looks as though Android Wear will get official iOS support in the near future.

As described in the tweet above, unmodified Android Wear already includes iOS related code with a class name titled AncsHandler. This is important because ANCS stands for Apple Notification Center Service, which is used by Bluetooth devices to access iOS information. For example, the Pebble smartwatch uses ANCS to connect to iPhone. No jailbreak is required to use the service, which is designed specifically for Bluetooth accessories.

Rumors have pointed to a future Google iOS app designed to allow iPhones to pair to Android Wear devices. With the code snippets already present in Android Wear 4.4.W, it seems that Google is already working on ANCS and iOS compatibility for future releases. It remains to be seen if this move will make prospective Apple Watch buyers think twice before picking up a smartwatch for their iPhone.

There are eight Android Wear devices currently on the market, with Apple Watch launching on April 24.