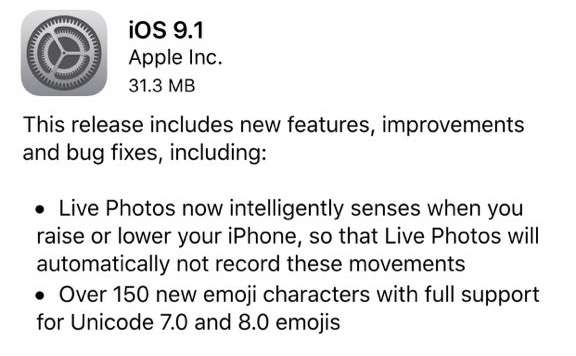 Apple has released iOS 9.1 with over 150 new emoji characters, Live Photo improvements and more. The update arrived after the Pangu Team released version 1.1.0 of their jailbreak tool. It is unknown if iOS 9.1 breaks Pangu 9, but it is likely, and users with jailbroken devices should avoid updating.

Update: Apple's security page for iOS 9.1 does include exploits used by the Pangu Team for their iOS 9 jailbreak tool. This means that iOS 9.1 will break the latest jailbreak and should be avoided if you want to keep your device jailbroken.

The official iOS 9.1 changelog notes that Live Photos "now intelligently senses when you raise or lower your iPhone so that Live Photos will automatically not record these movements." iOS 9.1 also includes stability improvements for CarPlay, Music, Photos, Safari, and Search, and fixes for bugs affecting the Calendar app, Game Center and more. Here are the complete iOS 9.1 release notes:

iOS users who wish to upgrade to iOS 9.1 can do so now by navigating to Settings > General > Software Update.