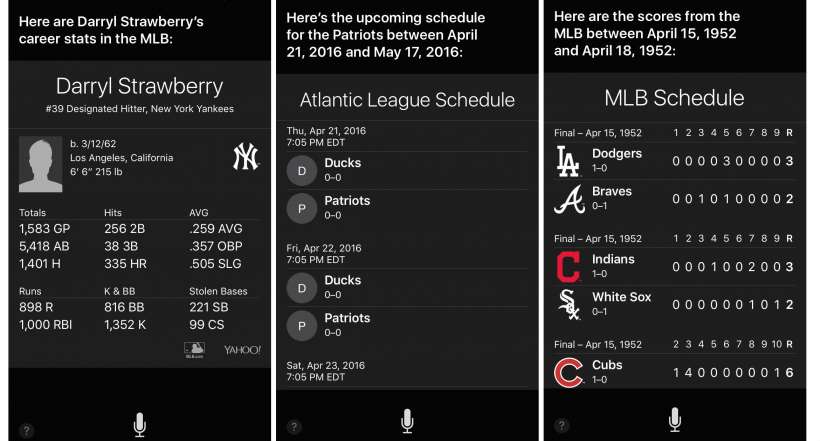 Siri has gained some new baseball knowledge just in time for the new MLB season. Apple's intelligent personal assistant can now answer "questions about more detailed statistics," according to The Verge. This includes questions about historical league stats, career statistics for individual past and present players and information about all 28 baseball leagues outside the MILB, including the minors.

Siri's new baseball knowledge is still limited, but it is a big improvement from just listing current scores and individual team schedules. Siri gained the ability to answer sports questions in 2012 with the introduction of iOS 6.

The Siri update comes on the heels of a new Apple and MLB deal that will supply every major MLB team with an iPad Pro model for the upcoming season. Apple also helped design a custom app called "MLB Dugout" with the the MLB media division. Teams can use the iPad Pro models and app to track stats, look up potential pitcher-hitter matchups, see spray-charts and even pull up videos. Unlike the NFL and Microsoft deal, MLB teams are not required to use the iPad Pro during games, but all 20 teams will now have the option. This is the first MLB season where smartphones, tablets and laptops are not banned from dugouts.

The 2016 MLB season kicked off on Sunday, April 3 with a triple-header and World Series rematch between the Mets and Royals. 22 teams will open their 2016 season on Monday, April 4.