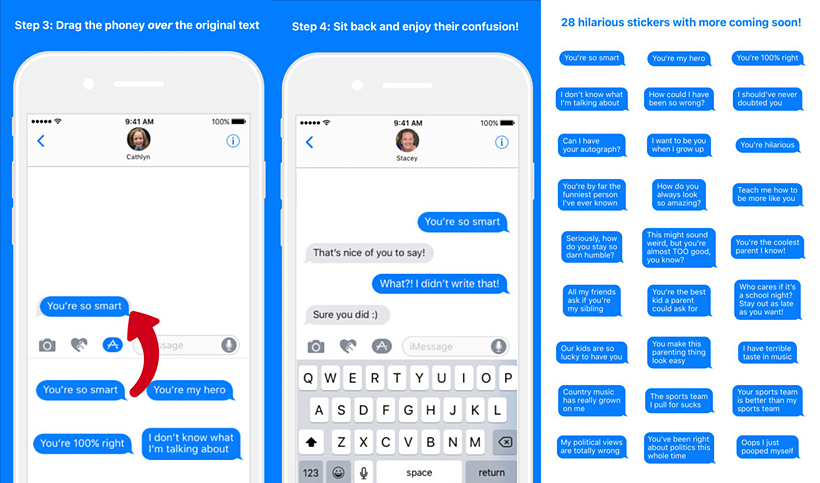 After just one week in the iMessage App Store, the sticker pack titled Phoneys has shot up the charts to number one. Instead of sitting back and enjoying his success, developer Adam Howell is now faced with an ultimatum from Apple. Despite the fact that Phoneys was approved by the company's app review process, it will be pulled from iMessage unless Howell makes substantial changes to the design.

Phoneys consists of a sticker collection with 28 different phrases designed to appear just like incoming iMessages. Since stickers can be placed anywhere, the idea is to cover up someone else's messages with a fake one from the app. In other words, users of Phoneys can trick the other person into thinking they wrote something they didn't. Once a phrase is chosen, it can be used to cover up a real message.

Of course the phrases are meant to make everyone laugh. Examples include "I don't know what I'm talking about", "The sports team I pull for sucks", "I have terrible taste in music" and the like. While it's not clear how the app made it through Apple's review process in the first place, lawyers contacting Howell have explained that Phoneys violates the App Store terms of service.

Not only has Phoneys been deemed a "prank" app, which is forbidden, but the app is not allowed to use the San Francisco typeface or message bubbles the same color as in the Messages app. Howell has also been asked by Apple to redesign the message bubbles in Phoneys to look more like comic book bubbles, which would further distinguish them from real texts and messages.

Howell has until Thursday to take action, or Apple has threatened to pull the app. According to AppleInsider, if Howell changes the app then current users would lose the stickers they already paid for in an update. Another option would be to create a new app conforming to App Store rules, which means letting the current version of Phoneys be pulled from the App Store. In this case, current owners of Phoneys would retain the questionable stickers but the app would never be updated.

Find Phoneys on the App Store for $0.99 while it lasts. Phoneys requires iOS 10.0 or later.