How Game Center invites will work in iOS 10 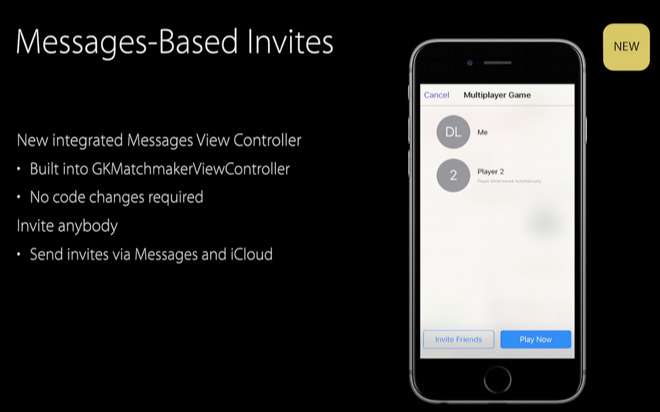 There is a lot of confusion surrounding the removal of Game Center in iOS 10. If you didn't already know, Apple has removed the Game Center app from early betas, and according to the iOS 10 developer's changelog it is not coming back. This does not mean Game Center features, such as leaderboards, will no longer be available, they will just be handled within individual apps. Apple Insider has posted slides from a recent demonstration at WWDC 2016 explaing the way Game Center multiplayer invites will work in the future.

Players will now be able to send invites through the Messages app to their already existing contacts, or to other players who are playing the same game. Tapping an invite will take a user directly to the game, or it will direct them to the App Store in they don't already have the game installed on their device.

The new Game Center invites are exactly like sharing a contact card through the iMessages app. Users can add additional text to the invitation and it includes the Game Center logo so it is easily identifiable. Apple has also added Game Center support to the Apple Watch in watchOS 3.

Finally removing the Game Center app was a smart move by Apple. Not only was the standalone Game Center app rarely used, but it also occasionally created problems by interrupting games with Welcome Back banners and login prompts. Apple has also made it possible for iPhone and iPad owners to remove other stock apps from their iOS devices in iOS 10.

The first iOS 10 beta is available now to users with an Apple developer's account, and the first public beta will be available in July. The final public version will be released this fall alongside the iPhone 7.