Lithium-ion batteries are our friends. They have a great energy-to-weight ratio, no memory effect and they don't lose a charge quickly when not in use. About one percent of these batteries is recalled due to problems. 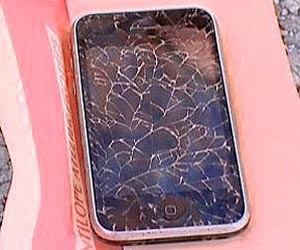 Unfortunately, these problems can include overheating, spontaneous combustion and explosions. A French teen has reported hearing a loud hissing noise before his iPhone screen shattered during a call. The photo above shows the screen, which he says launched a piece of glass into his eye.

Another iPhone owner in France also reported a shattering iPhone after hearing the story. This comes on top of news earlier this month that an iPhone locked in a car in the Netherlands caught fire and burned a gaping hole in the front passenger seat.

So are iPhones all over the world going to self-destruct at midnight on Steve Jobs' birthday? Apple will not comment.

The European Commission has been in touch with the company and had a news conference about the issue. According to their spokesperson, "Apple have come back to us... and what they've said to us is that they consider these are isolated incidents. They don't consider that there's a general problem."

"They're trying to get more information on the specific details of those incidents (reported in the media) and they will do tests as necessary to investigate the possible cause."

A representative of Apple Europe stated, "We are aware of these reports and we are waiting to receive the iPhones from the customers. Until we have the full details, we don't have anything further to add."

Several million notebook computer batteries have been recalled in the past few years by companies such as Sony, Lenovo and Dell due to the risk of overheating. Some of these defective batteries were used in Apple iBook G4 and PowerBook G4 computers.

Apple is also not the only company who has faced lithium-ion battery problems in its mobile phones. Nokia recalled 46 million batteries in 2007 after a Nokia N91 exploded in the Philippines.