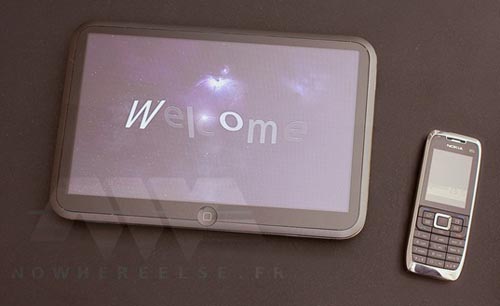 There are sure to be many more "leaked photos" churned out by zealous Photoshoppers. Maybe they'll have better mobile phones. Word on the street is that the upcoming Apple event on September 9th will NOT mention anything about a tablet device.

Speakers at the event (possibly even Steve Jobs) in San Francisco are expected to announce updates to iTunes software and iPod product line upgrades.

Rumors are still piling up about the future device from Apple.

In other Apple tablet news, Borders has released an online survey that mentions the future product in a list of "Digital Reading Devices". The question asks what devices the reader owns or plans to purchase.

Included in the list is an item that reads, "I plan to buy an Apple iPAD (large screen reading device) this year".

What could be better proof that a computer called the Apple iPAD is headed our way before Christmas?

Interesting to read this after the official announcement and pictures of the real thing. :)