Hope you're sitting down, folks. Take a look at the pictured SIM card trays below. Finally we have unequivocal proof the Apple tablet exists! 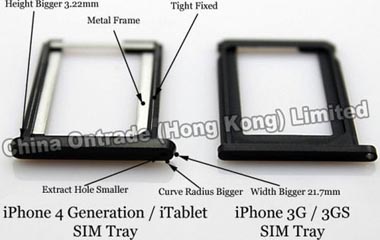 China Ontrade is the same company that brought us the iPhone 3GS bezel before the new iPhone was actually released. Only problem is that the bezel pictured had nothing to do with the iPhone 3GS. So file this 4th generation iPhone SIM card tray under ridiculous waste of time.

There are some other equally boring rumors circulating this week. Apparently Bill Keller, executive editor of the New York Times said he was preparing his paper for the "impending Apple slate." Maybe if your tablet gets bricked you can still write on the iSlate screen with chalk.

Another newspaper outfit, The Sydney Morning Herald, reports from Australia that Apple has been contacting media companies around the country to find out if they're interested in providing content for the device. The Apple tablet will be "small enough to carry in a handbag but too big to fit in a pocket. It will have a touch screen and be targeted at users who mainly want to surf the Web, read books and newspapers or watch movies."

The Sydney Morning Herald expects Apple to release the product in early 2010.

The Apple iSlate is definitely not going to be boring. Its going to be the truely first mobile pc. Go to www.islate.org to find out more about this device.