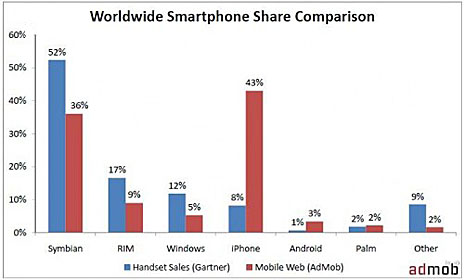 AdMob gathers the monthly information from usage statistics on its network of over 7,000 publishers and 1,600 mobile applications. In the latest report, the company combined its own data with more information on handset sales from Gartner.

Some other interesting statistics from the report:

Two billion out of the total 7.5 billion AdMob ads displayed on mobile devices in 160 countries were displayed on iPhone OS or iPod Touch.

In the US, 20 percent of ad requests come from iPhone OS and 14.8 percent from iPod Touch (worldwide, these numbers were 15.1 percent and 11 percent respectively).

The lead of Apple and steady growth in traffic illustrate the heavy focus of both iPhone users and iPhone software developers on the multimedia mobile web experience.