Right now 93,395 iPhone applications are currently available on Apple's App Store, but there are almost 9,000 more that have already been approved. This means that any day now the App Store will surpass a magic number of 100,000 apps for sale. 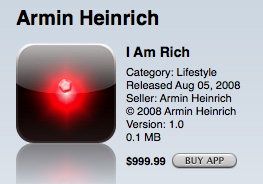 Too bad only 0.176% of those can be installed on the iPhone at once. Just one month ago Apple announced that there were 85,000 applications available via iTunes. One year ago there were 10,000 apps available for the iPhone and iPod Touch.

Almost 20,000 App Store applications are free. Many are $0.99 but the average price for paid apps is $3.25. Apple keeps 30% of all developer revenue from sales in the App Store.

The competition may be behind, but Apple can't take its position for granted in the mobile software realm. Many similar services have launched and could give Apple a run for its money. Smaller players include the Microsoft Marketplace, Palm's App Catalog and the Nokia Ovi Store.

BlackBerry App World has over 3,000 apps. Some analysts are pointing towards Google's Android Market as the biggest threat to Apple in the coming years. Android Market currently has 10,000 apps available but is poised to grow rapidly with the release of Android 2.0.

Unlike iPhone OS, Android runs on a variety of mobile devices. While Apple strictly controls what apps are approved for sale in the App Store, the Android Market is completely open. Twelve Android phones are already available on 32 carriers in 26 countries.

> Right now 93,395 iPhone applications are currently available on Apple's App Store,
> but there are almost 9,000 more that have already been approved.

If they are fully approved for download... why can't we????

Because you a fool.

I love it when men can't spell simple words like "you're".

so do you think android will be able to beat the iphone?